Back to all posts

What do I mean by that? Climate change is real (I can't believe I just said that because it goes without saying) and emissions need to be reduced right? Right.

In the early stages of Extinction Rebellion I'm sure I heard the phrase: 'the science is clear' which set off very faint, distant alarm bells in my head. Why? Because the science has been clear for decades, to me it just seemed a bit backward to be making such an obvious declaration. Why am I so bold? It's because I was worrying about climate change in the early nineties. As part of my Environmental Science degree I studied climate science way back then, so as you can understand that for me to hear the clear science was still clear in the late 2010s was a bit concerning.

But at least people are more aware now, you might be thinking. I suppose, but I very closely observe the communication on social media and this is where the denial comes in. I have had literally hundreds of conversations with people, online and in person to try to understand what's happening. This is what's happening: many people are wrongly thinking global warming is the extinction crisis. They are therefore wrongly thinking that all we have to do is lower CO2 and everything will be fine, I have heard people say this and it's quite shocking, to me. The idea that CO2 is the only enemy is such a gross over simplification that it's plain wrong. Lowering CO2 to below 400ppm may avert our unbelievably amazing planet from becoming too warm but (and this is the information a lot of people resist) we need wildlife as well and humans are killing wildlife and by that I don't just mean hunting, I'm also including habitat loss as well because the words we use to describe the way humans deprecate the natural world can be worryingly benign and entitled. For example the HIPPO acronym (attributable to Edward O.Wilson) stands for Habitat destruction, Invasive species, Pollution, human over-Population, Overharvesting by hunting and fishing - all good until you get to the overharvesting part - I mean harvesting, that's certainly a lot more benign sounding than ecocide.

When I try to explain to people that lowering CO2 won't save us, the reasons people have for clinging to their current understanding are numerous, here's a selection of the top ones: "it's all interconnected", "I think climate change is the priority", "climate change will soon become a bigger issue", "climate is the umbrella word which covers everything", "it's actually affluence which is the problem", "making the issue more complicated will be too difficult for people to understand".

Let's look at these briefly one by one:

How has this happened? It's because scientists specialise and because climate change is having its five minutes of fame and climate scientists are going along with it for their careers. Sorry but that is what's happening. No climate scientists anywhere are saying actually it's not all about climate, they're getting their followers, going to their speaking events and selling their books while they can. Meanwhile the less fashionable subjects such as invasive species or soil health and microbes get little coverage in comparison.

Think of it this way: how many species and ecosystems or just numbers of wildlife does humanity need to thrive? The answer is no one knows. I would have thought this would be a concern for the climate fixated but it doesn't seem to be.  Humans have been killing wildlife for thousands of years, our planet is already hugely depleted in that sense (see The Human Planet by Simon Lewis and Mark Maslin). 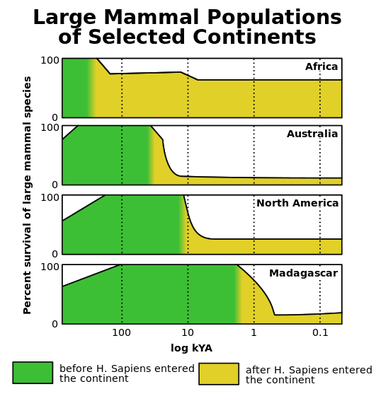 As I explain it climate change is the late arrival to the party, rudely taking over the conversation. I find the area of climate science actually toxic - there are any number of people on the internet, especially Twitter who have no relevant qualifications and have tens of thousands of followers and they are not saying their view is opinion, they are presenting their views as fact. This doesn't matter to them because people seem to love this misinformation and people love to get followers. As I say I have challenged these people time and time again and I never get a reasoned response, I can think of only one time where someone was ready to learn more, to take on other information. When I ask questions these unqualified people block me, sometimes I block them because of their warped nonsense.

If the denial is a coping mechanism I am here to ask questions and make you think. I have seen there are very few people who can handle the truth, the issues are psychological and always have been. Extinction Rebellion's one liner in my response to asking why the fixation on climate is usually saying they are not a climate group, only to go on about climate some more, which is why I refer to Extinction Rebellion as sixth extinction deniers, such a shame the organisation took that route. What I think would be better is instead of using the ubiquitous #climate hash tag they (and anyone / everyone) could use the #degrowth hash tag. Surely that's more all encompassing, meaningful and relevant than the climate tag? See degrowth here.

For anyone keen to take action to make the world a better place, here's my Facebook group.

My new EP called 'human nature changes', featuring the song 'Elon' is out on 9th June.